The “General Zaruski” entered the city harbour of Rostock yesterday evening and is staying in Rostock during the Hanse Sail for the second time. Pauline Baltrusch from Rostock is also on board. 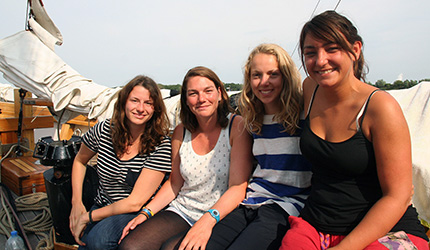 The 23-year old student sailed from Gdansk to Rostock with her friends Lena Geinzer, Anne Ernst and Marie Rückner and other young people from Poland and Sweden for six days. This trip was a thank you gift because Rostock supported the 25 meter long Ketch among other things with the purchase of life jackets.

“I was especially impressed that there are no tools and all the power comes from your fingers. And that there are seven sails.”, says Pauline Baltrusch. The next couple of days she will recover from the exciting trip with little sleep and will enjoy the sight of the other sailing ships from ashore .
Home port of the “General Zaruski” is Gdansk in Poland because the city bought the ship in 2008. Afterwards it was restored in the shipyard Gdansk Marine Works for two years. Since 2012 the ship serves as an ambassador for the hanse city of Gdansk and is used for sail training.

Caption
From the left: Anne Ernst, Pauline Baltrusch, Marie Rückner and Lena Geinzer stayed together on the “General Zaruski” for six days. The sailing ship from Gdansk arrived in the city harbour of Rostock yesterday evening. Photo: Stefanie Adomeit