„After many exhausting journeys, our sails show the first functional weaknesses and have to be replaced here in Rostock,“ says Plamen Swestarow, executive director the barque ‚Royal Helena‘. 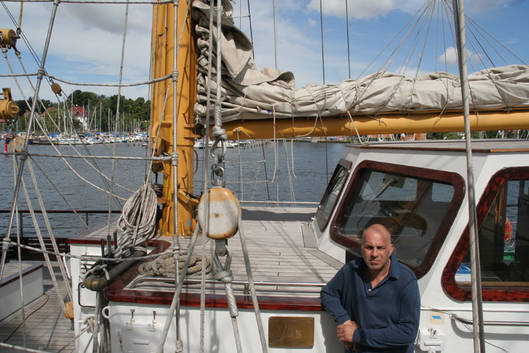 „In this case our hosts here in Rostock are of great help. We get what we need and agreements are complied as it has to be. So everyone on board is very satisfied.“

A plan, on which a crane has to be based in position to make the exchange of the sails possible, is adjusted at the moment. The ship does not lay in a good place: it’s the 4th position at berth number 79 in the city harbour of Rostock. The executive director knows, „it has to be worked circumspectly“ and is sure that the organization and the implementation of the work processes can be handled without problems.

The fact that Plamen Swestarow, as a son of a German and a Bulgarian, speaks the German language excellently and knows the conditions in the city harbour due to his visits of the Hanse Sail in the past, are an immense help. „I’ve been in Rostock with other ships. The ‚Royal Helena‘ takes part the first time, but I have already been here a few times.“

Incidentally, the „Royal Helena“ can also be seen as an emissary of the town twinning between Varna and Rostock. Varna is namely its home port, and as a port city it is connected with the Hanseatic city of Rostock. In the case of the incomplicated cooperation in the matter of the exchange of the sails this longstanding acquaintance might play an important role, too. At least Swestarow, who was born in Magdeburg, appreciates this amity and hopes that his barque ship’s seaworthiness will be restablished soon.