“Welcome to the Hanse Sail” – the 24th edition of the maritime festival was traditionally opened on the NDR stage by prominent persons. Erwin Sellering and Roland Methling as well as the public in front of the stage appreciated the ceremony which included the descent of weapon divers, traditional sounding of the ship's bell and the collective first tapping of the draught beer barrels. 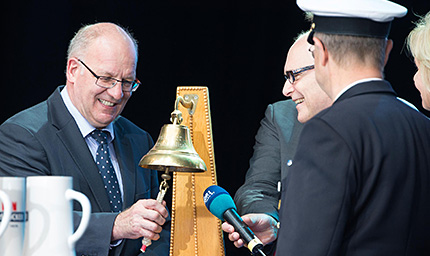 Taking place from 7 to 10 August, the 24th edition of the Hanse Sail is the world's biggest annual gathering of traditional sailing ships. This year's event surprises its one million visitors with a fleet of 211 traditional ships from 12 nations.

The Federal Minister of Transport who just became father for a second time opened the event with the traditional words: “I hereby declare the 24th edition of the Hanse Sail open!” The descent of weapon divers could be realized with the help of an air plane from the parachute club Barth after the actual helicopter “Sea King” from the Navy broke down. Before the traditional opening of the sail the crew of “Tres Hombres” – the last remaining traditional cargo ship without engine – handed the major of the city a parcel with fair traded goods.

Erwin Sellering has already formulated his ideas on the course and the effects of the “biggest and most important public festival here in Mecklenburg-Western Pomerania.” With a view to the “Sail Saturday” and the “Sail Brunch” which are part of “Business Meets Hanse Sail” the highest local politician states: “The Hanse Sail is a perfect marketing event for our region … and has become a motor for the tourist development in and around Rostock. It is an important gathering for captains of industry, especially those from the maritime branch.”
For the major of the hanseatic city of Rostock, the days of the Hanse Sail are the most intense days of the year. “This year it is the 10th year, I experience the Hanse Sail as the major of Rostock. Each year I am more looking forward to this event because with each year the contacts and possibilities for talks are increasing. The Hanse Sail offers a compact international and national network that is profitable for the hanseatic city.”

The ambassador of the Republic of Finland i.e. Mrs Pävi Maria Luostarinen was a special international guest of the opening ceremony. Our northern neighbour Finland is this year's official partnering country. Among further international guests of the 24th edition of the Hanse Sail feature amongst others Irakli Tcheishvili (Head of the City Parliament of Batumi), John Brædder (Major of the local authority Guldborgsund), Song Jiawei (Deputy Chairman of the consistent Committee of the People's Congress Hefei), Valerijs Kokis (Deputy City Director of Riga), Miroslav Matešic (Deputy Major of Rijeka), Robert Olsson (General Director of the Swedish National Maritime Museums) and Krzysztof Soska (Deputy City President of Szczecin).