In 2018, the Hanseatic and University City Rostock celebrates its 800th anniversary. The 28th Hanse Sail Rostock from the 9th to the 12th of August is part and parcel of the festivities. “The Hanse Sail, as a fantastic ambassador of our destination, will once again attract numerous visitors with the traditional sailing ships. The majority of those are already regulars; about one quarter experience the maritime celebration for the first time every year. Many families connect their Hanse Sail experience with a vacation to Rostock and enjoy the Baltic coast”, emphasizes Matthias Fromm, tourism director Rostock & Warnemünde, the importance of the event. 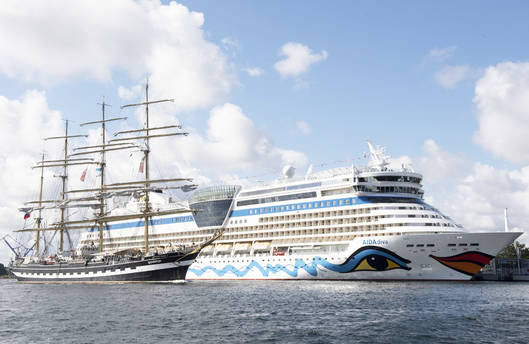 On the occasion of Rostock´s 800th anniversary the 28th Hanse Sail is a celebration of anniversaries, too. There were rarely so many milestone birthdays of ships: More than 20 ships celebrate their significant anniversary this year, among seven of them, zero is even the third digit. The oldest among them is the fishing boat “Hiddem” from Warnemünde, which was built in 1888 and currently lies in the museum harbour in Rostock. Two guests are centenarians: the „Hendrika Bartelds“ from the Netherlands and Poland's „Kapitan Borchardt“.

Also, three Haikutter celebrate an anniversary, as well as the race, in which they participate. Already for the 10th time, the fast, small fishing vessels start in the Danish Nysted on the day before the Hanse Sail, heading towards Rostock. On board, participants enjoy the atmosphere of the competition as well as the close contact with the crew. Thanks to sponsors like Scandlines or VOLVO, every participating ship receives start-up money.

Another anniversary deserves to be acknowledged. Rostocker Pils has been the cities´ beer  for already 140 years und cannot be missed at the celebration of ships on the Warnow river, since “Rostocker Oehl” was already the main export commodity during the Hanseatic era and popular everywhere. The Hanseatic Brewery Rostock has just now renewed their involvement as a main sponsor.

165 ships from eleven nations have announced their participation in the 28th Hanse Sail. These include the Russian four-masted barque “Sedov” (year of construction 1921) and „Krusenstern“ (1926), as well as the fully-rigged ships “Mir” from Russia (1987) and “Christian Radich” from Norway (1937). They invite you, just like most of the other ships, to join them on a sailing voyage or at the Open Ship. “We have a keen interest to ensure that the crews of the participating ships from all over the world feel very welcome and comfortable here in Rostock and Warnemünde. Particularly, we are pleased about the loyalty of the Russian tall ships towards the Hanse Sail. Also, we grade this as a political signal by the Russians, as a wish to have a peaceful and close co-existence in the Baltic Sea area”, stresses Holger Bellgardt, event manager of the Bureau Hanse Sail of the Tourismuszentrale Rostock & Warnemünde. For everyone, who prefers to drive instead of sailing is in good hands on the “Holland”. The tugboat from Harlingen in the Netherlands is visiting the Hanse Sail for the first time this year.

Between Thursday and Saturday, the naval base Hohe Düne opens its doors for an Open Base and Open Ship offering an exciting program. At the passenger quay in Warnemünde, the German marine presents itself with the frigate “Schleswig Holstein”.

Sweden is the international partner country for the 28th Hanse Sail. A fleet of wooden sailing ships defines the western end of the city port. The “Tre Kronor av Stockholm“, „Tre Hjärtan av Halmstad“, „Vega av Gamleby“ or „Hoppet av Brantevik“ have been invited to represent the art of their architects and their native ports.

On land, a diverse entertainment program awaits you, spread across themed markets, with various locations and on eight stages. Besides shanty choirs, local bands and newcomers, the media partners bring real stars to Rostock. Tom Gregory and Lions Head will perform on the NDR stage at the city port on Thursday night. On Friday, Marquess will spread a Spanish atmosphere to the event and on Saturday Glasperlenspiel and LEA will wow the audience. The highlight on the stage Hanse Sail and Antenne MV will be the gig of Lost Frequencies on Saturday. On Thursday, the show band Steppenwolf, with the support of OSPA, will perform a program for families and children: the musical “Tabaluga”.

The themed markets range from “Life during the Hanse period” on the silo-peninsula to a big fairground with a food court and rides and the Circus Fantasia. For the first time, the integrated cultural institution will stay and invites all visitors to the Kabutzenhof, for example to a circus show for children, a “have-a-go” – circus as well as a silent sound party. A few steps from there and directly at the quay wall – inside the Max-Planck-Institute – the university organizes a Science@Sail with the topic “planet science” during the weekend. Not entirely new, but upgraded, the fair trade area presents itself, where the fair-transport sailing ship “Nordlys” (1873) will moor. They added informative and entertaining talks, workshops and live cooking to the program, with the goal to familiarize the visitors with the topic “fair trade”.

Further events in the surrounding areas enrich the program of the 28th Hanse Sail. Numerous maritime exhibitions invite visitors, for example to the KTC, Rostocker Hof or to the traditional ship in the IGA-Park. There, the annual meeting of ship- and aircraft modelers will take place, tenderly called “Mini-Sail”. In Gehlsdorf, the shooting association Concordia invites shooters´ societies from all over Germany.  With their historic costumes and their traditional gun-salutes for the Hanse Sail Rostock and the traditional ships, they complement the atmosphere of the maritime festival.

Since 1991, the Hanse Sail is a fixed component in the calendar of events in Rostock and a tourist attraction since the beginning. One million visitors can be expected to visit the festival, which is lasting for four days. The Hanse Sail Rostock is part of the association of interests for maritime festivals in Germany (www.maritime-feste-deutschland.de) and a number of events in the Baltic Sea region, which take place under the brand Baltic Sail (www.balticsail.info).