There was a raving in the gym at Marienehe. In the opening match, the Brazilian team of the ‚Cisne Branco 1‘ already complied with the well-known cliche of Brazilian soccer: really good at dribbling, shooting and duels, but also refusing to let go of the ball. 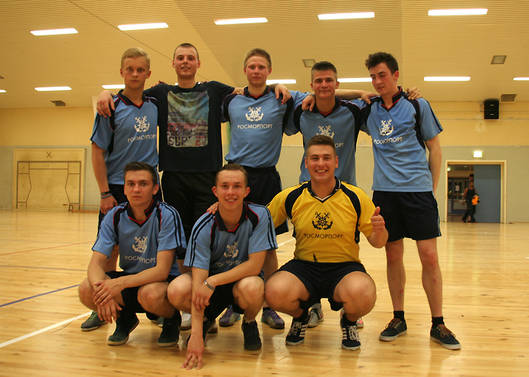 The team namley would have needed to beat the second team of the four-masted barque ship ‚Sedov‘ higher than „only“ 2:0 – relating to the hundred percent goalscoring opportunities. But at this moment, the reasons for the failure of the playing of the ‚Cisne Branco 1 and 2‘ were already indicated: even though the seamen of the sailing ship made an effort in their playing ability and ball control, there was a lack of mandatory goalscoring opportunities, and with them the goals. That way, ‚Cisne Branco 1‘ surprisingly lost the endgame against the strong and reliable men of the sailing training ship ‚Mir‘, even though the audience, ahead the soccer-playing women and men of the ‚Fridtjof Nansen‘, supported them sweepingly.

A short time ago, the team of the ‚Mir‘ could only wring a 0:0 from the opportunities-missing Brazilians, despite their concentrated defensive game. In the battle for the cup they reached the 1:0 due to a great move three minutes before the end of the play. This was defended sacrificially until the end. Thereby, after 2011, a team from the ‚Mir‘ won the cup a second time.

The Brazilians presented themselves as fair losers, as well as their second team, who lost the game for the third place against the second team of the ‚Krusenstern‘ 0:1, too. In fact, the public favourite, the mixed women’s team of the ‚Fridtjof Nansen‘, was able to sweep away the second team of the ‚Sedov‘ with 2:0 in the match for the 7th place. Thereby, the three inserted ladies were not only a pretty garning for the great playing of their goalkeeper, but also a bravely up-striking trio. Happy faces also for the helpers of the DRK, who assisted the soccer-playing sailors: „Small wounds, characteristic to soccer“, said Brit Zimmermann. Apart from that, „without special incidents“, so Mathias Stutz. Thus, the 16th Rostocker Pils Hanse Sail Cup 2018 is ready to come.