Traditionally the hanseatic city of Rostock invites its guests to a captain`s reception on the first evening of the Hanse Sail. This year the mayor Roland Methling and the head of the Hanse-Sail-Office, Holger Bellgardt, welcomed the captains of the guest ships with a familiar hospitality. 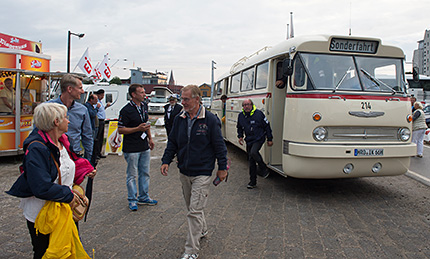 The ride to the event location, the frigate “Mecklenburg-Vorpommern”, was already spectacular. In the traditional buses of the RSAG (public transport company of Rostock) the guests were able to take a trip down memory lane, before they started conversations in a casual atmosphere in front of the sensational setting at the passenger quay of Warnemünde. The view of the “Gorch Fock”, the cruise ship “AIDAbella” which was leaving the harbour, the traditional sailing ship “Mercedes” under illuminated sails and a firework on the beach displayed the maritime charm of the region. Another highlight was the flag parade of the frigates. The 24th Hanse Sail gives thanks to the crew of the “Mecklenburg-Vorpommern”, which provided for a terrific catering alongside interesting conversations.