The 29th edition of the Hanse Sail Rostock from August 8th to 11th was a very successful event, characterized by great internationality and a peaceful coexistence of people from different nations. We are proud that the people of Rostock were such good hosts for the crews of the 170 participating ships as well as for our guests from all over Germany and the world", says Roland Methling, Lord Mayor of the Hanseatic and University City of Rostock." 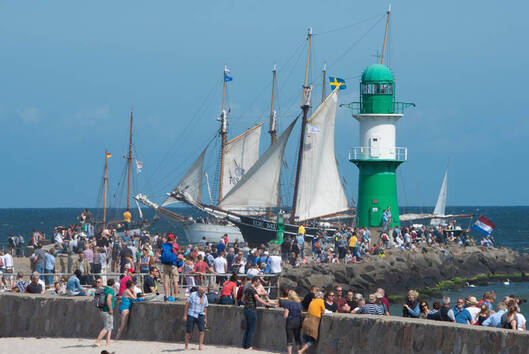 "The Hanse Sail is not only the tourist flagship for Rostock and Mecklenburg-Vorpommern, it is also an important economic factor for the region and offers an international political platform", explains Director of Tourism Matthias Fromm about the importance of the event.

Six sailing training ships called at the ports of Rostock, among them were three premiers including the "Amerigo Vespucci" from Italy, the "Gloria" from Colombia and the Dutch "Urania". "This year’s Hanse Sail is outstanding in its internationality and is topped both by the visitors and by the guest ships. The 'Cuauhtemoc' (Mexico) for example, during their laytime in the city harbour at the Thursday and Friday welcomed 20,000 guests on board. This shows that our visitors continue to have an unbroken interest in traditional and modern sailing ships from all over the world. The expectations of the crew have been more than fulfilled," highlights event manager Holger Bellgardt from the Rostock & Warnemünde Tourist Office.

Tens of thousands of visitors celebrated the performances of Caught in the Act and DJ Stephan Mangelsdorff on the two main stages. The later closed with the fireworks presented by OstseeSparkasse Rostock. For the first time, the Norddeutscher Rundfunk and the Hanse Sail Office shared the stage in the city harbor.

Of the 30.000 seats available on all four days of the Hanse Sail, 18.000 were arranged by the Tall-Ship Booking Centre of the Hanse Sail Association. The trips were very well booked, on Saturday even fully booked. "We would like to thank all those who supported the future of the traditional ships and the big sailing events in the Baltic Sea region with their sailing trips", states Holger Bellgardt.

Also the showmen are overall satisfied with the 29th edition of the Hanse Sail. "A relaxed atmosphere prevailed on the markets, which invited visitors to stroll and stay. Saturday was a very good day for the market drivers", states Inga Knospe, Managing Director of Großmarkt Rostock GmbH, which organises the market area in the City Harbour. The first use of returnable cups has led to a significant reduction in the amount of waste on the event site. "This was clearly noticeable", estimates René Weiland, Head of Operations at Stadtentsorgung Rostock.

The German Navy is highly satisfied with the approximately 18,000 visitors from Friday to Sunday at the naval base Hohe Düne. In addition, 9,000 guests took advantage of the offer to board the frigate "Mecklenburg-Vorpommern", which had moored at the passenger quay in Warnemünde, during an open ship.

The Rostock Police also drew a thoroughly positive conclusion. "The mission was completed without any major disruptions or serious injuries due to accidents," says Achim Segebarth, Head of Operations, with satisfaction. "The security at such a major event is always a joint effort of all security partners". The water police also draws a positive conclusion of the water side deployment during this year's Hanse Sail in Rostock. The Head of the Water Police inspection Rostock, Stefan Büchner, is "very satisfied with the high state of order on the water".

In order to successfully stage such a big event as the Hanse Sail and to find the best possible solution for emerging problems, it requires a close cooperation of all actors as well as the support of authorities, institutions and companies", notes Bellgardt with a view to the future. This is also positive thanks to the participation of many sponsors of the Hanse Sail: "Altogether about 40 partners support the maritime festival. This makes us look forward confidently to the coming year, in which we will celebrate an anniversary with the 30th edition of the Hanse Sail from 6th to 9th August 2020".