The Hanse Sail attracted an audience of a million again in 2017. Despite mixed weather, visitors from far and wide were flocking to the quays of Rostock and Warnemünde. 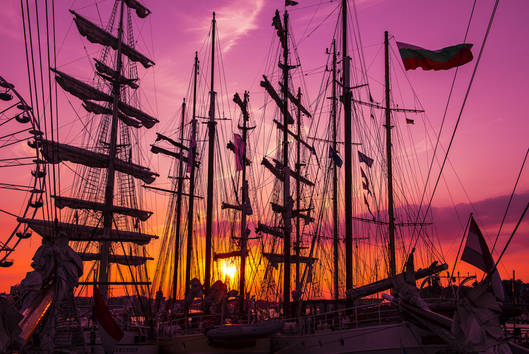 All in all, 30.000 guests took the chance to sail with one of the participating ships, of which more than 12.000 were distributed via the tall ship booking centre of the Hanse Sail Association. “I would particularly like to thank everyone who took the invitation to come aboard the ships. By buying the tickets they support the traditional ships, the Hanse Sail and maritime festivals in general,” Roland Methling said, first mayor of the Hanseatic and University City Rostock.

Like pearls on a string, the ships from Szczecin, the final harbour of the Tall Ship Races, entered Rostock, with the “Cisne Branco” leading the way; the “White Swan” from Brazil was visited during the four days of the Hanse Sail by approximately 20.000 visitors. “Szczecin with its Baltic Sail is a strong network partner. Our events support each other, so that new ships enter our harbours again and again and eventually become regular guests,” Methling explains.

“The 27th Hanse Sail was a well-attended event, regarding the ships as well as the visitors. This is one of the reasons we know why the concept works – we have a very loyal audience and the good reputation of our event attracts new guests again and again,” as Holger Bellgart, the Director of the Hanse Sail Office summarizes. In order for the traditional ships being able to remain loyal to the event, is it important to Holger Bellgart to take responsibility: “We have to take a stand for the preservation of maritime cultural heritage. This holds true not only for us as event host and the Hanseatic City Rostock, but also for all of the coastal countries and particularly for the maritime economy, on the federal and state levels equally.”

“The Hanse Sail creates political and economic effects, it provides a fantastic atmosphere for making new contact, for example on a trip on one of the tall ships,” the tourism director Matthias Fromm summarizes. “Regardless of the weather, the Hanse Sail is a guarantee for good tourism and connects tradition with the modern world in an impressive way. One example of this is the OSPA sailing arena in the city harbour, which is a great venue for staging competitive regattas on the Warnow with modern boats in striking distance to the traditional ships,” Fromm says.

Good Mood along the Quays
“Despite the up-and-down weather during both the main event days, we are very happy about how many guests visited the ships,” the director of the Tall Ship booking centre Mandy Lange summarizes. “At the passenger quay in Warnemünde, people were standing in the rain in order to buy tickets for trips with the tall ships.”

The German navy was among the most satisfied contributors. 28.500 people made use of the offer to visit the naval base Hohe Düne as well the two ships in the city harbour and Warnemünde; approximately 2.500 more than last year.

Also, the market traders were satisfied with their sales. The city harbour was well-attended during sunny weather on Thursday and Sunday, and particularly in the afternoon and evening hours of the Friday and Saturday. “The Hanse Sail is an important and high-quality event for the image of the city,” according to Inga Knospe, executive director of the Großmarkt Rostock GmbH. In addition, there was a high demand for the Hanse Sail information and sales stands: “Already on Friday all of our rain jackets were sold out,” the sales manager Sandra Henske reports.

The passenger quay at Warnemünde was “jam-packed.” Particularly the open-ship offers were in high demand. The crews of he “Cisne Branco”, “Sedov”, “Krusenstern” took the excited visitors around on “their” training ships.

There was an excellent atmosphere at all of the eight stages, no matter the weather. However, visitors flocked to the headliner concerts in particular. At the NDR stage alone more than 20.000 visitors gathered during the four event days and celebrated until late night. Particularly, the performances by “Markus”, star of the New German Wave, and the 90’s pop band “East 17” at the Hanse Sail & Antenne MV stage were exceptionally well attended.

Together, the sponsors and media partners helped drumming up business for the maritime festival of Northern Germany. The highlight of this was the 90-minute long live broadcast on Friday at 8.15 pm on the NDR channel. The Hanseatic Brewery Rostock sold about 1.5 Million bottles ROSTOCKER Pilsener and 10.000 t-shirts. All in all, more than 150 accredited journalists reported from the event.

Safe at the Sail
“Our security efforts for the Hanse Sail 2017 went according to our plan and met our safety goals. Many of the enacted measures of our security plan contributed to a peaceful and relaxed event,” said a relieved Jörg Hübner, managing director of the security service of the 27th Hanse Sail Rostock.

Part of these measures were a prohibition of glass bottles for the event venue and a temporary closure of the L22 near the city harbour, among others. “We conducted spot checks of bags and rucksacks and pointed out the prohibition of glass bottles when necessary. The visitors accepted this.” The temporary closure of the L22 between Grubenstraße and Kanonsberg on Friday and Saturday evening contributed to an enormous slowing-down of the affected street area heavily used by pedestrians and caused no tailback of the road traffic. “That was an effective measure for the security of the visitors,” according to Hübner.

Also, the Rostock police draws a positive summary and reports that this year’s Hanse Sail on land and water was calm and peaceful. In conjunction with federal riot police forces, further police stations as well as the federal river police forces of Mecklenburg-Pomerania, the Rostock police was on patrol with up to 320 officers in Rostock, Warnemünde and Hohe Düne and could provide a high level of security.

Rostock calls for the Support of the “Stettin”
During its trip on Saturday morning, the icebreaking steamer “Stettin” collided with the cargo ferry “Finnsky” near the international port. The hull was pierced and slit open over a length of approximately two meters about 40 centimetres above the waterline.

In order to cover the cost of repairs for the damage, the organisers of the Hanse Sail ask for public support. “The ‘Stettin’ has been a loyal guest of the Hanse Sail for 26 years and now we want to lend our support. We hope that many people and institutions joins us,” Roland Methling, first mayor of the Hanseatic and University City of Rostock, stated. In 2018, during the 800th jubilee of the city and the 28th Hanse Sail, the ship and its crew is cordially invited to come to the Hanseatic city.