The stages are as much part of the Hanse Sail as the long strolling miles at the quay walls, which are filled with sailing ships. While the sailors depart for their trips in the morning, the visitors can hear the first tones on the eight stages at the city port and at the lighthouse in Warnemünde. There is something for everybody: from shanty to folk, pop and metal, the artists show their various facets. Thereby, national and international artists as well as musicians from the region present themselves. 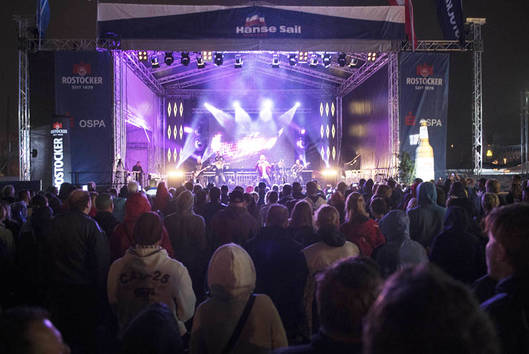 There is a lot going on on the stages during the Hanse Sail. Photo: Lutz Zimmermann

The stage Hanse Sail, in cooperation with Antenne MV, will be built on the Haedge-peninsula. An exceptional highlight is the performance of the DJ “Lost Frequencies” from Belgium on the Sail-Saturday starting 11 p.m. The internationally known artist achieved his breakthrough with the hit “Are You With Me” in 2014 and the electro-pop-scene is no longer complete without him. The current hit of the 24-year old “Melody” has been in the German charts since last April. But the program of the two days before is equally impressive. On Thursday, the musical “Tabaluga” will be performed by the Maffay-showband Steppenwolf and Res Facta and No Quarter will rock the stage in the evening. Friday night will be colorful with the schlager-group Big Maggas and the well-known Eurodance-band Culture Beat. On Sunday, the stage belongs completely to musicians from Mecklenburg-Western Pomerania, from shanty choirs like De Klaashahns to the metal band Red Poison, who will revive the musical style of the 80s.

The NDR puts stars from the international music scene on stage. On Thursday, the newcomers Lion’s Head and Tom Gregory will open the star-show. Lion’s Head from New York realizes his own style with his music. The Briton Tom Gregory enjoyed a success with his hit “Run To
You” last year, especially in Germany. The main theme of the Sail-Friday with NDR 1 Radio MV and Nordmagazin is the summer. The band Marquess from Hannover creates a Latino-feeling at the city port with their songs “Bienvenido” and “La Vida es Limonada”. On Saturday, today’s stars of the German pop scene Glasperlenspiel and LEA will be brought on stage. Already four years ago, the duo Glasperlenspiel, consisting of Carolin Niemczyk and Daniel Grunenberg, visited the Hanse Sail. At that time, LEA was the background singer of the group. This year, she will perform by herself and is, no after the release of her hits “Leiser” and “Wohin willst du?” with the duo “Gestört aber GeiL”, known nationwide.

The ROSTOCKER stage near the M.A.U. Club provides a platform for artists with different styles. “Neues aus dem Liedermaching Untergrund“ – this is how Liedfett describes its very own style. The genre mix of the band from Hamburg includes pop, punk rock as well as HipHop and rap. The singer-songwriter Miss Allie will perform with emotion, humor and charm on Friday night. Her German songs inspire with humor and her English tracks invite you to dream. At first, the band Fisherman´s Wife from Rostock started as a duo in 2015. From 7 p.m. on Saturday night, the group, who consists of six members by now, will bring a country feeling with their folk-rocks hits to the Hanse Sail.

An authentic cowboy-feeling comes also from the Goliath show-stage near the wooden crane. There, you have the opportunity to give it all at the Line Dance Day on Saturday. With around 300 cowboys and cowgirls you can dance the night away. The stage at the lighthouse in Warnemünde spreads a maritime atmosphere. The departing ships will be sent off to their trips with shanty music. Also, dance- and gymnastic groups demonstrate their talent here. In the evening, all sailors have the possibility to celebrate at the Sailor´s Party with a view of the sea and the beach.