For the 29th time, traditional sailing vessels and museum ships from all around the world will follow the invitation of the Hanseatic and University City of Rostock to come to the Baltic metropolis on the second weekend in August. 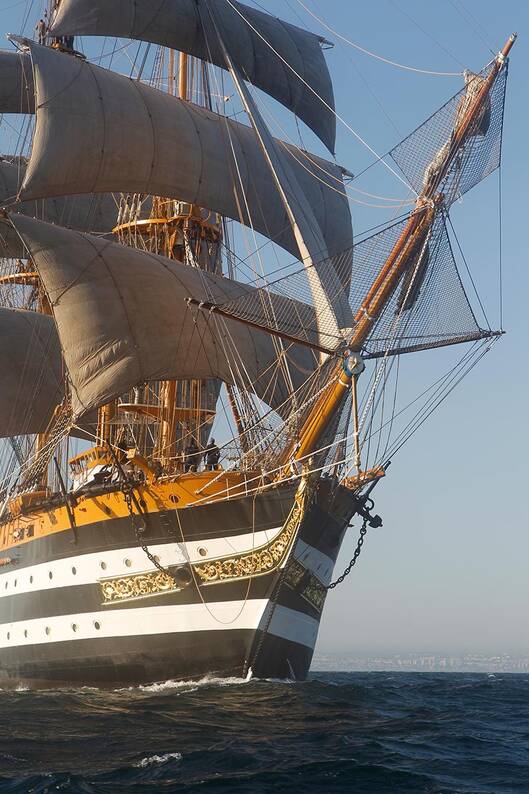 “The Hanse Sail is a fantastic ambassador of our destination and will attract thousands of visitors from Europe and overseas as well as many returning guests. Around one quarter of the visitors will experience the festival for the first time. Many families are combining the Hanse Sail with their holidays in Rostock and enjoying the coast of Baltic Sea”, emphasizes Matthias Fromm, tourism director of Rostock and Warnemünde, the touristic value of the event.

Ships from 15 nations
Six sail training ships will be heading to the harbour of Rostock for the 29th Hanse Sail. Among them are the two Russian windjammers “Kruzenshtern” and “Mir”, which participated several times in the past but are nonetheless appreciated guests. For the first time, the sail training ship of the Italian Navy “Amerigo Vespucci”, the flagship of the Columbian Navy “Gloria” as well as the navy sail training ship “Urania” from the Netherlands will be sailing to Rostock this year. The sextet will be completed by the “Cuauhtemoc” from Mexico, which will return to Rostock for the third time after 1996 and 2007.

170 ships from 15 nations are signed up for the Hanse Sail 2019. Most of the ships will be welcoming guests during open ship times or offer trips on the Baltic Sea, which can be booked over the booking office of the Hanse Sail Association. The association was able to win 150 volunteers, who will take care of the crews. Holger Bellgardt, head of the Office Hanse Sail of the Tourismuszentrale Rostock & Warnemünde: “It is important for us that crews from all over the world feel welcome here. We are especially pleased by the loyalty of the Russian tall ships. We interpret this as a political sign and as the wish for a peaceful and close togetherness in the Baltic Area.” The sail training vessel “Mir” from St. Petersburg, whose name can be translated with “peace” or “world”, will be honoured in particular this year. The ship will be illuminated with colourful lights and accompanied by music composed by musician Ola van Sander from Rostock, on Saturday (10th August) around 10.30 p.m.

Among the participating ships, five are celebrating their 100th birthday this year: the “Morgenster“, “Nobile”, “Fridtjof Nansen”, “Hanne Marie” and “Nordwind”.

The Haikutter-Regatta, which starts in the Danish city Nysted one day before the Hanse Sail, will be held for the 11th time this year. Sailing passengers can experience the competitive atmosphere and the close contact to the crew on the small and fast ships. The regatta from Nysted to Rostock is a fixed part of the town twinning of Guldborgsund-Kommune and the Hanseatic and University City of Rostock. Both cities are members of the Baltic Sail Association. The goal of the association is the cooperation between cities with maritime festivals and the preservation of maritime traditions and culture.

Diverse program on land
On the day before the Sail (7th August), there will be a concert in the Halle 207 by the “junge norddeutsche philharmonie“ within the “Festspiele Mecklenburg-Vorpommern”.
The 29th Hanse Sail will be opened on Thursday (8th August) by patron Federal President Frank-Walter Steinmeier, accompanied by the President of the Portuguese Republic, Marcelo Rebelo de Sousa, who is on an official visit in Germany. Locals and visitors can expect diverse entertainment on thematic markets and a variety of stages. Alongside shanty choirs, regional bands and newcomers, the media partners will also bring stars to Rostock. In the City Harbour on the “Stage Haedgehalbinsel”, arranged by the Office Hanse Sail and Antenne MV, Caught in the Act and The Milli-Vanilli Experience will perform amongst others. On the “Stage Central City Harbour” presented by the NDR and the Office Hanse Sail, City and Brenner will entertain the visitors.

There will be a variety of markets reaching all over the event area organized by the Großmarkt Rostock GmbH in collaboration with many partners and service companies. The OSPA will present a children’s and family area at the Kabutzenhof and invites visitors to a climbing parkour as well as other activities.
Nearby directly at the quay – in the Max Planck Institute for Demographic Research – the University of Rostock will host the Science@Sail following the theme “Element 1(4)19” on Friday and Saturday. Visitors can experience science first hand and watch entertaining experiments. This year the Fair Trade-Area will be upcycled and will be located at the harbour terrace, where the Fairtransport sailing ship “Nordlys” will set its anchor for the third time to present the topic “fair trade”.

In Warnemünde, the stage at the lighthouse will be one of the highlights for visitors. The sport beach arena at the beach near the lighthouse as well as the strolling mile at the passenger quay will draw attention.

The navy at the Sail
The naval base Hohe Düne will be open to visitors from Friday to Sunday and will present an exciting program as well as open ship. The frigate “Mecklenburg-Vorpommern” will lie at the passenger quay in Warnemünde. On Saturday morning (10th August), the navy vessel “Pegnitz” will be in the City Harbour.

Further event components
Further events and event areas will enrich the 29th Hanse Sail. Diverse exhibitions, for example in the city hall (“Tapestry in amber colours” by Iveta Vecenane from Riga), are inviting visitors. The IGA Park will present itself with a new event concept this year. There will be a family friendly program as well as the Mini-Sail, the annual meeting of ship and airplane model builders. The “captains of the country streets” will also be present and show some of their American vintage car collector’s items. The ‘Tradi’ is a great lookout for observing ships entering and leaving the harbour.

The Schützengesellschaft “Concordia” invites various societies from all over Germany as well as visitors of the Hanse Sail to the 20th Gunners and Saluting Gun Meeting. With their historic costumes and saluting guns for the traditional vessels, they complement the atmosphere of the maritime festival.

“Climate friendly and sustainable future” is topic that reached a increasing importance over the last years. The Hanseatic and University City of Rostock recognizes the problem of plastic waste. For the first time, there will only be specifically made reusable cups, which will be washed in high performance dish washers, on the event area. The beer of the Hanse Sail – Rostocker Pils – to go! Holger Matthäus, Senate for Building and Enviroment, emphasizes: “Sailing and a clean environment belong together. The biggest traditional sailing festival in Mecklenburg-Vorpommern gives visitors the joy of drinking from environmentally friendly cups for the first time.
This is the birth of a new Hanse Sail quality – without fossil disposable dishes!”

Since 1991, the Hanse Sail is a fixed component of the event calendar in Rostock and a touristic flagship since the beginning as well as an economic meeting and forum for cultural and political cooperation in the Baltic Area. The Hanse Sail is part of the interest group “Maritime Feste” in Germany (maritime-feste-deutschland.de) and a variety of events in the Baltic Area under the association Baltic Sail (balticsail.info). Up to one million visitors are expected to come to the four-day event.