The Hanse Sail is a tourism flagship, an economic factor, a meeting place for politicians and entrepreneurs, a public festival and a cornerstone for the preservation of the maritime heritage. From the 10th to 13th of August, the Hanseatic City of Rostock celebrates the 27th Hanse Sail. This year, organisers are looking forward to 200 traditional sailing and museum ships from twelve different nations as well as about a million visitors. 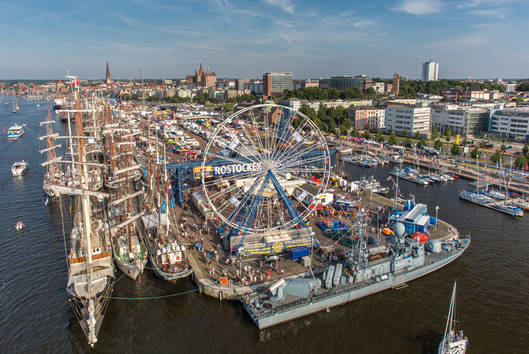 “For the past twenty years, the Hanse Sail has been a visitor magnet for the Hanseatic and University City of Rostock. With its vibrant image, the Hanse Sail supports national and international marketing in a unique way and contributes to an ever-growing impression of the Hanseatic City as a maritime and touristic destination. This also entails a local creation of value that benefits a variety of businesses and service companies,” according to tourism director Matthias Fromm.

A Festival for Everyone
Like a blue ribbon the Warnow connects the various event locations of the Hanse Sail Rostock. Beginning at the Gehlsdorfer Ufer with the meeting of the cannoneers, along the city harbour from Silo peninsula via the Haedge peninsula, down Kabutzenhof until arriving at the OSPA sailing arena, which hosts a jumbo waterslide and exciting competitions every day. Next stop, the freight port and fishing harbour that contains a part of the fleet, an at IGA Park, at which 86 model builders from all over Germany meet for the Mini-Sail. Finishing in Warnemünde, a strolling promenade stretches along the beach from Hotel Neptun to the stage at the lighthouse. The Sport & Beach Arena invites guests for a visit at Strandaufgang 1a and hosts the Sunshine live House Party on Saturday at dawn. In total five windjammer and a ship of the marine will be tied up at the passenger quay. From there, visitors can get to the other side of the Warnow where the naval base Hohe Düne is located and that invites visitors for the open day and where they can enjoy the yachts of the Yachthafenresidenz sway in the wind.

All in all, the promenade runs 3.5 kilometres of music on eight different stages as part of the land-based programme. Highlights of the program, which is supported by Antenne MV and the NDR, include the performances of the bands “Markus,” “East 17,” “Kate Ryan,” “Tonbandgerät,” and “Aura.” A popular highlight are the two the bonfires on Saturday evening that are let off at two different times this year: at 10pm in Warnemünde and 22.40pm in the city harbour.

The Ships are at the Heart of the Event
About 190 traditional sailing ships are heading for Warnemünde during the Hanse Sail Rostock, including the ‘big ones.’ “The Hanse Sail and Rostock enjoys a good reputation among the owners and crews of the sailing and museum ships, which makes us very happy. Many of the ships are loyal to the event and every year more join us by word of mouth,” says director of the Hanse Sail office Holger Bellgart. “We are committed to making our guests feel welcome in Rostock,” according to the chairman of the Hanse Sail Association Günter Senf. “Every ship will be provided with a guide, we invite captains and marine engineers to official receptions, we organise a football tournament for the crew, and we issue tickets for local public transport with the support of the Warnow Transportation Authority,” Senf continues. Furthermore, the Hanse Sail provides shipowners with an important platform in the form of a brunch with the press at 11th August at 11.55am, as the continuance of German traditional ships is threatened because of new a security policy.

Volunteers and Sponsors support the maritime Festival
“I want to thank the volunteers as well as the 50 sponsors that have supported us in many ways. Apart from the Hanseatic Brewery Rostock, the OstseeSparkasse Rostock and the Sparkassen Financial Group Mecklenburg-Pomerania, these are our patrons AIDA, Euroports and Rohde & Schwarz, which cover the costs for the larger ships calling the harbour,” Holger Bellgardt explains. The local Volkswagen car dealer Rostock provides a shuttle service for the crews and HEPA Wälzlager, the local housing association WIRO or the Scandlines shipping company assist in financing complex event components.

The Hanse Sail will be opened on 10th August 2017 at 5pm at the NDR stage and has its finale on Sunday, 13th August 2017 with the “Parade of the Nations” at 6pm at the city harbour. In between, the visitors can enjoy four days of sailing experiences, sport, fun, and music. Detailed information on the programme, the list of participating ships as well as maps can be found in the brochure SAIL KOMPASS or on the official website www.hansesail.com. For those at home, the NDR channel will broadcast the Hanse Sail live on Friday, 11th August 2017 at 8.15pm!