When Rostock & Warnemünde become the meeting point for around 170 traditional sailing ships and museum ships from 14 nations and up to one million visitors from 8 to 11 August, the Hanseatic and University City will not just be celebrating a festival. 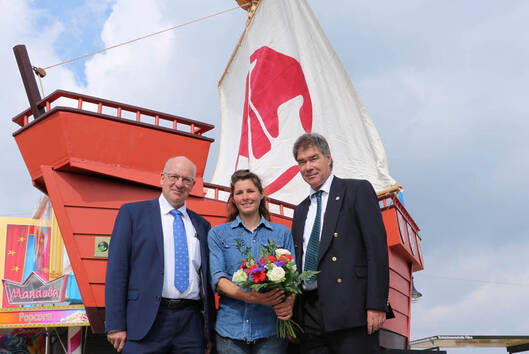 During the opening press conference Mayor Roland Methling (left) and event manager Holger Bellgardt welcomed Anne-Flore Gannat, captain of the "Nordlys" who has moored the first participant ship of the 29th dition of the Hanse Sail in the Rostock city harbour. Photo: Hanse Sail/Frederike Schirra

The world's largest annual traditional sailing meeting is often used as a platform to invite partners from politics and business to the Baltic Sea in order to show them the potential of the maritime metropolis. "During the Hanse Sail, Rostock presents itself to guests from all over the world as a cosmopolitan business and tourism location. We use the maritime festival to consolidate our international network with our partner cities and cooperation partners", announces Mayor Roland Methling.

The Hanse Sail offers the framework for important economy events such as the "Hanse Sail Business Forum" and "Business meets Hanse Sail". The latter brings together 500 national and international decision makers who have been Invited by the business development agency "Rostock Business", the state business promotion "Invest in MV" as well as the "state marketing MV" in Rostock. Within an exclusive programme, the guests of the event will be offered an excellent network of national and international business contacts, specialist lectures, time for in-depth discussions and for new ideas. Highlight is the discussion round “Innovative MV - fresh wind through fresh ideas” chaired by Manuela Schwesig, Prime Minister of Mecklenburg Western Pommerania. In addition to current project partners and potential investors, among the guests will be decision-makers from business, science and politics. In the past 16 years, the advantages of Rostock and the state of Mecklenburg-Western Pomerania as locations for a large number of companies could be experienced at a special moment.

To the traditional "Hanse Sail Business Forum" the Initiativkreis der Wirtschaft Mecklenburg-Vorpommern - consisting of the Chamber of Commerce and Industry of Rostock, the Chamber of Crafts of Ostmecklenburg-Vorpommern, the Unternehmerverband Rostock-Mittleres Mecklenburg e.V. - together with the Enterprise Europe Network M-V invites to the Steigenberger Hotel Sonne Rostock on August 8th, 2019 the topic "Founder Culture in the Baltic Sea Region - From the Lecture Hall into the Economy". The organizers welcome representatives of state politics as well as around 200 guests from business and science to an exchange of experiences in order to learn from the best in this field as well. The organisers are optimistic that this conference will not only strengthen the cohesion in the Baltic Sea region, but also advance our region with new ideas.

The programme of the Hanse Sail is developed every year and supplemented by new focal points. "We want to become even more family-friendly and expand the programme", says event manager Holger Bellgardt. "Our aim is to continue structuring what is happening on the water and on land and to set fresh accents". In Warnemünde, this includes the "Mir" parade trip on Saturday evening and the crew parade on Sunday. With the friendly support of the OstseeSparkasse Rostock, a big adventure world will be set up at the Kabutzenhof, where young and old Sail visitors can try their hand at the Ninja course, the football darts or a surf simulator.

In the immediate neighbourhood the programme of the Circus Fantasia is again part of the Hanse Sail and invites you to a Silent Sound Disco on Friday and Saturday evening as well as a "Mit-Mach-Circus" on Saturday and Sunday.
Science to touch - Under this motto students and employees of the University of Rostock, which celebrates its 600th anniversary this year, and other regional science institutions develop the Science@Sail. The two-day event on Friday and Saturday at the Max Planck Institute gives all visitors the opportunity to gain exciting insights into current science in presentations, to experience science in experiments and to get to know show physics.

From Friday to Sunday, the Open Naval Base in Hohe Düne also has a child-friendly programme on offer. Adolescents can inform themselves in the career truck and open ship about the possibilities of service with the Bundeswehr. Helicopter sightseeing flights are also offered from Hohe Düne.

This year, the IGA Park is becoming more involved and offers an entertainment programme for the whole family in front of and on the traditional ship. Once again, the Mini-Sail, the annual meeting of ship and aircraft model builders, is part of the programme. The "captains of the highway" present their "ships" - lovingly maintained US cars. And from the traditional ship guests have a good view of the incoming and outgoing ships on the Warnow.

In addition to shanty choirs, regional bands and newcomers, media partners bring stars to Rostock. Caught in the Act and The Milli Vanilli Experience will perform in the city harbour on the "Bühne Haedge-Halbinsel", where the Hanse Sail Office and Antenne MV will be responsible for the programme. On the "Bühne Zentraler Stadthafen", for whose program the NDR and the Hanse Sail office are responsible, the Ostrock legend City and the band Brenner can be experienced.

Thematic markets in the city harbour and the stroll miles on the passenger quay and the promenade in Warnemünde offer a varied programme on all four days. Two of this year's highlights are the looping ride "V-Maxx" and the obstacle course "Chaos Airport". The visitors of the Hanse Sail can travel into the past at two places. The market "Life during Hanseatic Times" on the Silo Peninsula invites to take a look into the time of the Hanseatic League. The Hanseatic cogs from Bremerhaven, Kiel and Wismar will also moor there, as will the Kraweel "Lisa von Lübeck". In the pirate village opposite the Haedge Peninsula, kids can marvel at pirate fights and can try their hand at crossbow shooting. Directly in front of the Hanse Sail office there are delicacies from the neighbouring federal state Brandenburg, gastronomes from Rostock's twin town Szczecin are waiting at the jetty of the passenger ships to Warnemünde with Polish specialities.

The Hanse Sail is looking towards the future when it comes to "sustainability". The fair trade area in front of the restaurant "CarLo 615" conveys the importance of fair trade through lectures and exhibitions inviting visitors to taste the fair trade products themselves. The Fair Transport sailboat "Nordlys", built in 1873, also moored there, transporting its goods across the world's oceans with the power of the wind. The ship invites you to visit it and to its bar, where you can taste French wine, among other things. The music programme in this area promises a fun atmosphere to linger in.

In order to reduce the amount of garbage produced by the Hanse Sail, which has so far been caused to a large extent by the use of disposable drinking containers, this year, for the first time, only specially manufactured and designed returnable cups will be used on the event grounds. The beer of the Hanse Sail - Rostocker Pils - to go!

The Hanseatic and University City Rostock is cosmopolitan and hospitable at the Hanse Sail. "The crews of the participant ships should feel welcome. We have a proven caretaker system", informs Dr Frank Elsner, chairman of the Hanse Sail Association. About 150 volunteers are working tirelessly as ship attendants as well as in the areas of stages, fleet and technology. 40 restaurants in Rostock welcome crews from participating ships to their homes during the "Gastliche Mecklenburger" campaign. Many of the participant ships invite to sail along and steam off. The tickets are available at the Tall-Ship booking centre of the Hanse Sail Verein. An emphasis for the future adjustment its activity is the development of routes with tradition ships in the Baltic Sea region - Maritime Heritage Tours.

Under the slogan "29 to the square" a lot of partners found gathered in order to support the Hanse Sail Office or the Hanse Sail Association with the execution of the event as well as with different projects: with 29 euro high 2 = 841,00 EUR. "We would be pleased if other companies or people would join us and get involved with the Sail and our city, so that we can secure and develop the event, tackle new projects or promote traditional ships and maritime culture. Our special thanks go to our long-standing partners, the Ostdeutscher Sparkassenverband, the OstseeSparkasse Rostock and the Hanseatische Brauerei Rostock," emphasises Holger Bellgardt. More than 40 sponsors or donors support the event.

The 29th edition of the Hanse Sail Rostock will be opened on August 8th at 5 p.m. in the city harbour by the patron, Federal President Frank-Walter Steinmeier. The event ends on August 11th at 6 p.m. with a flag parade of smaller ships.

In the context of this year's Hanse Sail extensive visitor surveys will be carried out to prepare the 30th edition of the Hanse Sail Rostock (7th to 10th August 2020) for a comprehensive analysis and conclusions to improve the concept of the event.