17 Haikutter – more than never before – participated in the 9th Haikutter-Regatta from Nysted in Denmark to Rostock to kick off this years‘ Hanse Sail. 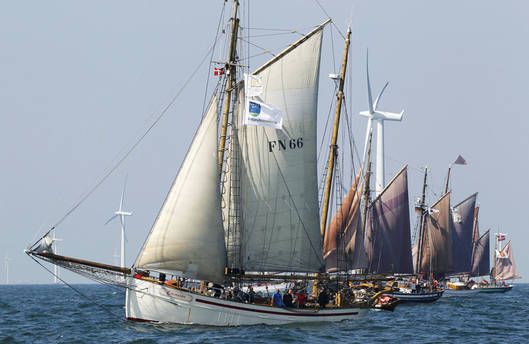 „The „Carmelan“ was leading the field right from the start. Picture by Herbert Boehm

On board were about 85 sailors. They got to the ships by using the Scandlines-ferry early in the morning of the 9th August. The weather was great when the race began in time at 12.30  aloft the windmill park in front of Lolland-Falster.

Right from the start the „Carmelan“ caught the perfect wind and was able to sail dircetly towards the goal, while the ships at the back drifted too far eastwards and lost all their chances to win. When the race was concluded due to al calm early at 16.00 the winner „Carmelan“ was almost clear. At 17.00, after all participating ships shared their GPS-position with the new head of the race, Stefan Schwannecke, the results was officially announced: The „Carmelan“ (GER) got in the first place.

The „Dana“ (GER) performed an impressive final spurt, but still became second. Third place was occupied by the Polish ship „Olander“. Captain Martin Wille reports: „We are really happy about this victory! The well-tended state of our ship, as well as a good crew and a quantum luck have been decisive for us. In the end of the race our ambition to keep this start-finish victory was high!“
But nevertheless all participants of the race are victors.

Thanks to sponsors like Scandlines, Adler-Schiffe, Janny’s Eis, Heinrich Hirdes GmbH, the Lolland- and the Guldborgsund communities, the Hanse Sail Association and the hanseatic town of Rostock every partcipating ship receive an entry fee of 22,55 euros per metre ship length.