Federal President Frank-Walter Steinmeier, the President of the Portuguese Republic Marcelo Rebelo de Sousa and the Prime Minister of Mecklenburg-Vorpommern Manuela Schwesig opened the 29th Hanse Sail Rostock with the traditional glass of the ship's bell. 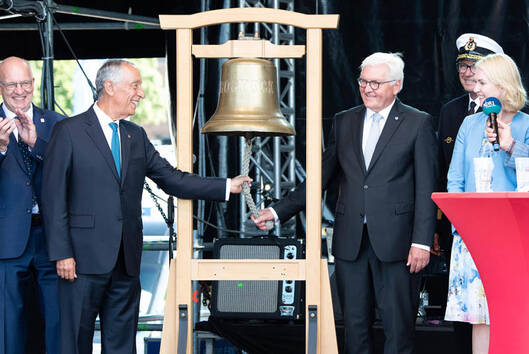 During his inaugural visit to Lisbon in 2018, the Federal President told his Portuguese counterpart about the great windjammer ships in Rostock and invited him to visit the Hanse Sail this year. "It is an honor and a pleasure for me to be here", states Marcelo Rebelo de Sousa in German in order to welcome the visitors.

"The Hanse Sail is the absolute highlight and the biggest maritime folk festival in Mecklenburg-Vorpommern. This year I was very happy to hand over the patronage to the Federal President", announced Minister President Manuela Schwesig. "What fascinates us all again and again are the great traditional sailers when these beautiful old ships come here to us in Rostock.

During the ceremony with the flags of Portugal, Latvia, Mecklenburg-Westen Pommerania, the Hanseatic and University city Rostock as well as the Hanse Sail combat swimmers of the navy jumped from a helicopter into the Warnow River and reported a successful jump to the inspector of the navy Andreas Krause on stage.

Mayor Roland Methling is looking forward to the first meeting with the "Amerigo Vespucci" and the "Gloria" as well as to the third visit of the "Cuauhtemoc" in Rostock. Also the regular guests "Greif" and "Stettin", who have been heading for the Hanse Sail in all weathers for 29 years, deserve special attention.

"We have an infinitely colourful and international event this year. Whoever invites guests from all over the world is proud and happy when they come", says event manager Holger Bellgardt about the next four days of the event.

From 8 to 11 August, around 170 traditional sailing ships and museum ships from 14 nations will transform the event area on the Warnow and Baltic Sea into a maritime El Dorado.