The Minister President of Mecklenburg-Vorpommern Manuela Schwesig and the Mayor of the Hanseatic and University City Roland Methling opened the 28th edition of the Hanse Sail Rostock with the traditional glass of the ship's bell in the best mood. 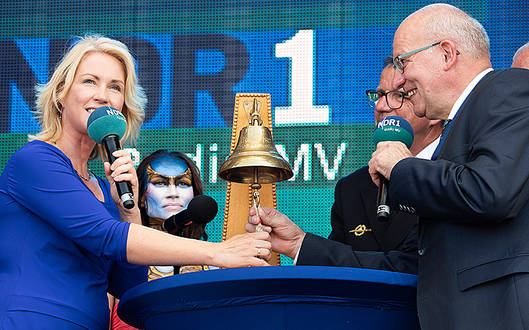 From 9 to 12 August, around 170 traditional sailing ships and museum ships will transform the event area on the Warnow River and Baltic Sea into a maritime Eldorado. "The Hanse Sail Rostock is the biggest folk festival in Mecklenburg-Vorpommern and stands for tradition, modernity and cosmopolitanism. It is an honour for me to be the patron of the event again and to be able to ceremoniously open it", announced Prime Minister Manuela Schwesig.

Partner country of this year's Hanse Sail is the Kingdom of Sweden, whose ambassador Per Anders Thöresson was also present at the opening on the NDR stage. "I am a passionate sailor myself and what is happening here in Rostock is really amazing. The Hanse Sail is the most beautiful festival I have ever seen", enthused Ambassador Thöresson. The Swedish fleet of traditional wooden ships is an integral part of the Hanse Sail and can be visited at Kabutzenhof in the city harbour.

Also a loyal partner of the Hanse Sail is the German Navy, which participates with several ships and an open base in the largest annual traditional sailing meeting of the world, as the inspector of the Navy Andreas Krause announced. Navy combat swimmers had jumped from a helicopter into the Warnow River with the flags of Sweden, Germany, Rostock and the Hanse Sail before the opening and had brought them onto the stage. The ceremony was completed with the tapping of the draught beer of the Hanseatic Brewery Rostock.